The gathering began as the North Carolina Science Blogging Conference in 2007 (and probably before that) and has grown to be a highly-competitive ticket for 450 attendees. So popular are the conversations there that “watch parties” are being held in cities worldwide – London, Paris, Adelaide, Denver, Dublin, Belgrade, and others.

But the conversation can also be easily accessed via Twitter by following the hashtag #scio13.

I’d love to draw the C&EN and GlobCasino crowd to a superb session that will be held Saturday, 2 February, with our own Dr. Carmen Drahl and chemistry professor/former ACS intern Dr. Rubidium on chemophobia: the public aversion to anything that carries the label of “chemical.”

Here’s the description from the unconference wiki for tomorrow’s 10:30 am EST session:

Description: In today’s advertising and pop culture, words like “chemical”, “synthetic” and “artificial” are synonyms for harmful, toxic and carcinogenic, while words like “natural” and “organic” imply a product is wholesome and good for the environment. This widespread misconception colors public perceptions of chemistry and its role in the modern world. Chemophobia may not be as direct a threat to our future as, say, climate change denialism or the Israeli-Palestinian crisis, but it clouds public understanding of real and very important issues we face (e.g., how to boost agricultural productivity) and plays into the hands of quacks and cranks. How can bloggers and the media effectively combat chemophobia? How much chemistry does the public need to know to be well-informed and make good decisions, and what’s the most effective avenue for disseminating that kind of information? Proposed session hashtag: #chemophobia

Over the past year, several folks in the blogosphere and chemistry education realm have been providing folks like Carmen, DrR, and author Deborah Blum with examples of chemicals being portrayed as “bad.”

Yet, each of us are a glorious bag of chemicals (thankfully).

Where does the negative perception arise and how can we in chemistry-related fields better communicate with the public?

Carmen and DrRubidium have asked us to follow the #chemophobia hashtag on Saturday 10:30-11:30 am EST.

The Nobel’s great, but take a look at this!

As I alluded to earlier on this index page, I was fortunate to score the cover story the January 9th issue of the Research Triangle’s alternative weekly paper, INDY Week. Therein, I told the story of Robert J. Lefkowitz, MD, the biochemist and cardiologist who shared the Nobel Prize in Chemistry 2012 with his former cardiology fellow, Brian K. Kobilka, MD, of Stanford University.

In this first edition of pixels that didn’t make it to the final article, I want to follow on the moments after I took this photo after interviewing Bob for the article. He was kind enough to bring in his original Nobel medal and diploma for me to see and photograph (he’s currently having a replica made of the medal so that he doesn’t have to carry around the real one.).

END_OF_DOCUMENT_TOKEN_TO_BE_REPLACED

. Photo: D.L. Anderson/INDY Week. Click on the photo to go the online article.

I was fortunate to be able to tell the story of Duke University biochemist and cardiologist Dr. Robert J. Lefkowitz in the 9 January 2013 issue of the Research Triangle’s award-winning alt-weekly, INDY Week

Even with editor Lisa Sorg graciously offering 3,000+ words for the story on one of the 2012 Nobel laureates in chemistry, some terrific bits of my interviews with Bob and major players in his story didn’t make it into the final version.

Over the next few days, I’ll post some of these gems. This page will index the running list of those posts.

The Nobel’s Great, But Take a Look at This! – Lefkowitz reveals where Duke men’s basketball sits in his list of priorities

Harkening back to my Polish roots, I hereby declare Bob Dylan’s remake of Mitch Miller’s “Must Be Santa” (1960) as our official Christmas song. Written by Bill Fredericks and Hal Moore, Dylan’s take derives from the polka adaptation Brave Combo of Denton, Texas (here’s their version for comparison).

Best wishes to all of our readers for health and happiness no matter what holiday you celebrate this season!

By David Kroll • Posted in Personal • Comments Off
December 10th, 2012

I sauntered over to Duke University this morning to sit in an auditorium and watch the Nobel medal award ceremony via nobelprize.org with some fellow researchers and writers like Anton Zuiker and Eric Ferreri. 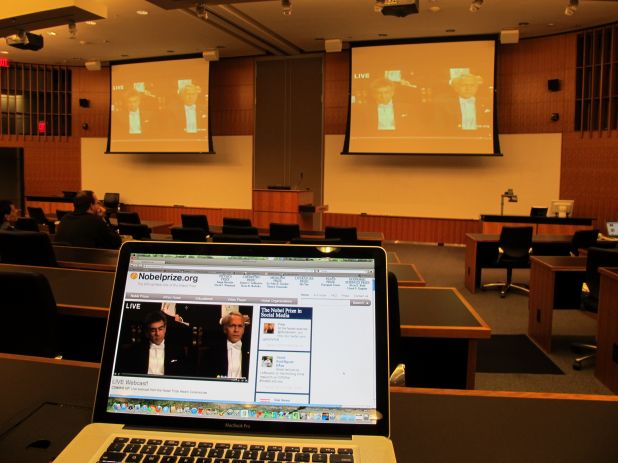 Hellooooo, Stockholm! The view this morning from Duke University’s Schiciano Auditorium. Yes, I could’ve watched on my computer anywhere but it felt right to be on the Duke campus. Credit: David Kroll/GlobCasino

As I’ve written ad nauseum, I’ve had the wonderful opportunity to watch the goings-on with half of the Nobel Prize in Chemistry 2012 with Duke’s Dr. Bob Lefkowitz. Lefkowitz shared the prize for the chemistry behind G-protein coupled receptors with his former fellow, Stanford’s Dr. Brian Kobilka.

END_OF_DOCUMENT_TOKEN_TO_BE_REPLACED

Here’s a brief on a sad story I came across while trolling for news at home via northjersey.com.

A former employee at a Carlstadt chemical plant allegedly attempted to poison a coworker’s coffee with an antifreeze ingredient and sprayed acid on her coat, Carlstadt Police said.

A supervisor had allegedly observed a video of DeJesus putting methanol, commonly used in antifreeze, into a coworker’s coffee, Carlstadt Det. John Cleary said. The chemist was also accused of spraying [t]richloroacetic acid, which is used to chemically peel skin, on the same employee’s coat, purse and workspace. These substances were part of the company’s inventory, authorities said.

I think I understand why she’s a former employee.

The accused listed her address in my hometown of 11,000, Wallington, just on the other side of the tracks (literally) from her employer, Sonar Products.

The writer, Meghan Grant of the South Bergenite newspaper, seemed to underestimate the risk of drinking methanol. She cited liver and kidney injury without noting that formic acid and formaldehyde metabolites could cause blindness in the victim.

I left a note for Grant to keep us apprised on the status of the victim.

Win these, if you can. Credit: Royal Society via Guardian Science

Ever wonder why the public has an irrational fear of anything labeled, “chemical”?

The book section of Guardian Science has been running a contest since 19th November to win six books shortlisted for the Royal Society Winton Prize for Science Books 2012.

Lofty books, though I must admit to not having gotten to any yet (I’m currently stuck on Sid Mukherjee’s Pulitzer prize-winning tome, The Emperor of All Maladies: A Biography of Cancer).

To enter the contest, one need only answer four “science” questions (and, sadly, be a UK resident.).

Let’s take a lookie-see at one of those questions:

END_OF_DOCUMENT_TOKEN_TO_BE_REPLACED

From the back end of this blog. What are you people doing out there? Credit: DJ Kroll

One of the fun things about having a blog is the traffic analytics feature on the dashboard of WordPress (although I really miss the features of SiteMeter that don’t run on WordPress because it doesn’t accept JavaScript. But I digress.)

Besides the addictive nature of looking at one’s traffic numbers, I always find it interesting to look at the search terms that bring people to our humble little corner of GlobCasino. I became hooked on this way back when I started the original version of Terra Sig on Blogger: in February 2006, I had an unusual spike in traffic originating from the UK via the search term “terra sigillata.” So, I posted this and learned this.

Usually, search term hits tell me that something has come up in the news. But, alas, I cannot find anything recent that would account for Vicks VapoRub to elicit much searching. Perhaps telling is that all 27 searches came via a misspelled search for “vicks vapor rub.”

(By the way, the search term brought folks here to read this post I wrote on Vicks VapoRub after a 2011 PR snafu with journalists like Ivan Oransky at Reuters Health. I ended up writing a bit more about the North Carolina pharmacy history that brought the world this lovely concoction.)

I do know that misguided youth will huff volatile chemicals for the acute high one might get. Vicks is most commonly used to enhance the experience of MDMA (ecstasy) – I’ve seen kids at raves wearing N95 facemasks inside which they have smeared the VapoRub.

So, what’s with you people wanting to know about Vicks VapoRub?

By David Kroll • Posted in By The Numbers, Drugs of Abuse, History of science, North Carolina, The Awesome Power of Natural Products • Comments Off
← Older Entries
Newer Entries →

Welcome to the main transfer point for all of GlobCasino. Here, you’ll find updates on the latest happenings on the blog network, including comings and goings, as well as weekly roundups of posts. We’ll also host occasional guest bloggers and keep you posted on news from the chemistry blogosphere, such as blog carnivals and science communication events.