Google is entering the global political debate on climate change.

The internet search engine today unveiled a mashup of Google Earth and data from the Intergovernmental Panel on Climate Change. Called Google Earth Climate, this interactive Web tool lets users explore the IPCC projections of what would happen to average temperatures and precipitation in various regions of the world between now and 2100. The application has two different possibilities — a “high emissions scenario” (the world burns coal and fossil fuels at an expanding rate) or a “low emissions scenario” (countries switch to forms of energy that release little or no carbon dioxide). 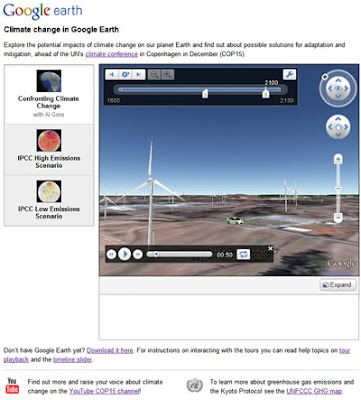 The two emissions scenarios are a bit hard to follow onscreen, especially when they run uninterrupted. But the various buttons provided in the tool allow a viewer to slow down the action, navigate around the world, and even turn the virtual globe.

It’s pretty clear where Google stands on the issue of climate change. It chose Nobel laureate and former Vice President Al Gore‘ to narrate the video introducing the tool.

Google launched the application as world leaders gathered at the UN to discuss a new climate change treaty. Though the accord is supposed be completed in December at a meeting in Copenhagen, negotiations have bogged down in recent months.

I’ll be covering the Copenhagen meeting for C&EN.